Guardiola following his four-match man has heavily defended Aguero – who has played 19 times for both club and country this campaign. The manager stated that the forward is not an overly aggressive player following the damaging reports from the media due to his tackle. END_OF_DOCUMENT_TOKEN_TO_BE_REPLACED 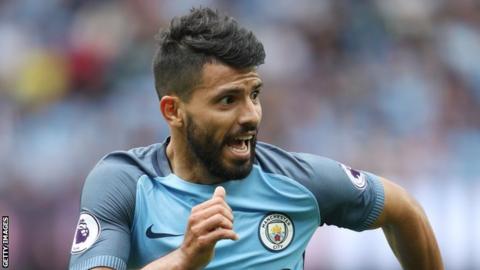 Its an extremely difficult rumor to believe considering that the Argentine attacker was a hugely influential player for Manchester City ever since he joined back on July of 2011 and in his debut season, he managed to score over 20 goals and the Argentine attacker still continues to score a healthy amount of goals on a consistent basis in every single season. END_OF_DOCUMENT_TOKEN_TO_BE_REPLACED However, he wants to win as many trophies as possible with Manchester City before the end of his contract. Sergio Aguero has said that it was a pleasure for him to work under Pellegrini and wants to thanks the Chilean manager for everything he has done for the club.
END_OF_DOCUMENT_TOKEN_TO_BE_REPLACED END_OF_DOCUMENT_TOKEN_TO_BE_REPLACED

However, Aguero believes that Pep Guardiola will not be satisfied with this kind of results and will want to win trophies. He said that he had talked with Lionel Messi and that the latter has told him that Guardiola is quite impressive as a coach. He hopes that Guardiola will help the team go forward and improve on every aspect in order to win trophies. END_OF_DOCUMENT_TOKEN_TO_BE_REPLACED

Manchester City, who has the advantage of having scored two away goals in Paris, will be hoping that they will make it to the semi-finals for the first time in their history. But for this, they will need to overcome a dangerous Paris Saint-Germain side that did have occasion to kill the game in the first leg.

Sergio Aguero was substituted during the weekend game against West Brom because of injury, and City fans have feared the worst for the Argentinian forward. However, Manuel Pellegrini was adamant that his player will be fit for Tuesday and that he will be playing in the Champions League match.

Pellegrini fielded a much-changed side in the match against West Brom and obviously had an eye on the Tuesday clash. Indeed, this is the only chance of silverware for the Manchester side, and Pellegrini will be desperate to end his contract with the club with a trophy. He is due to be replaced by Pep Guardiola during the summer. END_OF_DOCUMENT_TOKEN_TO_BE_REPLACED

Sergio Aguero claims that he would prefer if Manchester City avoided Barcelona and Bayern Munich in the quarter-finals of the Champions League.

The Premier League outfit have reached the stage of the competition for the first time in their history. They beat Dynamo Kyiv 3-1 on aggregate to end the miseries of the past. However, Aguero is experienced enough to know that it will take a lot more from the team to get into the semifinals or even the finals. In order to have the best chance of progressing past the quarter-finals, Aguero says that it would be great if City avoided the two favourites – Bayern Munich and Barcelona.

Real Madrid, Paris St Germain, Benfica, Atletico Madrid and Wolfsburg are the other teams that City could face in the stage of the competition. Even though Madrid and PSG are also extremely strong, Aguero says that the two most successful clubs in this competition over the last five years has been Barcelona and Bayern Munich. The Argentine will hope that he rediscovers his form in time for the start of the quarter-finals. The 27-year-old has 26 goals in 33 appearances, but none in the last three. Aguero will be hoping to hit top form in order to impress manager Guardiola, who will be taking over from the summer. END_OF_DOCUMENT_TOKEN_TO_BE_REPLACED

Sergio Aguero put up a world class performance the other evening to smash Norwich City out of FA Cup.

Aguero first scored a wonderful goal in the 16th minute of the game and then assisted another one later on.

Manuel Pellegrini, the City manager, reckons it’s just the start for the star striker and he will be getting better and better with more games under his belt.

After coming back from injury, Aguero had shown signs of being a little out of rhythm in the past couple of games, but, against Norwich, he was at the job right away.

Lauding him in his post game talk to the media, Pellegrini said, “Sergio is the sort of player that when he is in form, he would make big impact on the game as he did today and that’s why, he is the favourite of the supporters.”

“I believe with the more playing time he gets, the level of his game will keep going up. He is one of our vital players going forward in the season.”

At this point of time, Manchester City is in with a chance to win as many as four titles. They are alive in the Premiership, in FA as well as League Cups and also in Europe.

They are not leading the Premiership however and are at the second position, trailed by 3 points to the Gunners.

When asked if the team is thinking about completing the quadruple this season, the Chilean said, “We are taking one match at a time and try and do our best in that.”

“What’s most important is to make sure that the fitness level of the squad is good as there are a lot of matches coming up in the next few weeks.”